At the moment, the Olympic 2021 games are taking place in Tokyo, and as the world moves forward with technology, the Olympics is also following suit by incorporating AI tools to improve the process.

As you might expect, things have improved greatly in the last 125 years. Omega, the official timekeeper for the Olympics since 1932, is responsible for many of these innovations. A notable example is the first photoelectric cell photo-finish camera, dubbed “Magic Eye,” introduced in 1948 in London, which was a joint project between Omega and the British Race Finish Recording Company. The previous method was to use a stopwatch and the human eye to determine the first athlete to cross the finish line.

Despite this, caution was exercised when evaluating the technology. Official timekeeping was still based on hand-stopping in 1948.

As a result, Omega Timing has focused on not only more precise timing (it introduced its Quantum Timer, which is 100 times more accurate than previous devices, in London in 2012) but also improving ways to monitor in real-time the growing number of Olympic sports.

Sport climbing is among the many events getting a fresh new scheduling treatment this year, along with swimming, athletics, gymnastics, and equestrian races. The most interesting thing, however, is how Omega has trained its artificial intelligence to learn beach volleyball for over four years. “In volleyball, we use Computer Vision to track both athletes and balls,” says Alain Zobrist, head of Omega Timing. To do this, we’re combining image processing technology with artificial intelligence.”

R&D activities at Omega Timing have been carried out in-house by 180 engineers since 2012, with positioning and motion sensor systems developed in-house, says Zobrist. The ultimate goal was for Omega to be able to provide detailed live data on athlete performance for more than 500 sports events. To match what viewers see on screen, this data must also be measured, processed, and transmitted in less than a tenth of a second. 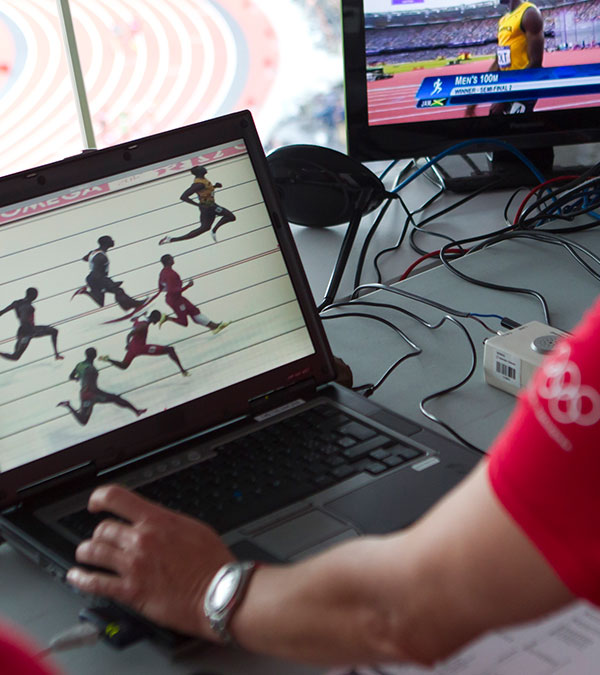 For beach volleyball, an AI is trained to recognize myriad shots, from smashes to spikes and variations thereof, and passes, while also gaining insight into the ball’s flight path, using information obtained from gyroscope sensors in the clothing of volleyball players. These motion sensors are used to provide information about an athlete’s movements, including jump heights, speed, etc. After processing, this data is made available live to broadcasters for application in commentary and on-screen graphics.

Zobrist said the AI had the hardest time tracking the ball in play when the cameras couldn’t see it. “Sometimes, athletes’ bodies cover it up. “Sometimes it’s outside the TV frame,”. The challenge was to track the ball when it has been lost. When it appears again, it would recalculate the gap between when the ball was lost and when it was recovered, and then include the [missing] data to continue. This was one of the major problems.”

Omega Timing claims its beach volleyball system runs at a speed of 250 frames per second and is 99 percent accurate. Professor Toby Breckon from Durham University is interested to see if this stands up during the Live Games as well as if it is compromised by racial and gender differences.

The Omega CEO is confident and explains that while Google or IBM may have been easier to ask for the AI expertise Omega needed, this was not an option, we cannot rely on another company. In order to explain the results and how the athletes reached them, we must have the expertise.”

Zobrist says the Paris Games in 2024 will set the new stage for future timing and track improvements. There will be a whole new set of innovations. Obviously, it will revolve around timekeeping, scoring, and certainly around motion sensors and positioning. Also in 2028, Los Angeles. The projects we’ve got there are really exciting, and we’ve only just begun them.”

Please help us enhance your experience by giving us your opinions in the comment section!

Global Story of the Week – Evergrande – another 2008 crisis?

The Evergrande Crisis’ Repercussions And How It May Affect India

Would it cost me more to order from Zomato & Swiggy?

Global Story of the Week – Evergrande – another 2008 crisis?
3 days ago

Global Story of the Week – Evergrande – another 2008 crisis?

The Evergrande Crisis’ Repercussions And How It May Affect India

Would it cost me more to order from Zomato & Swiggy?
1 week ago

Would it cost me more to order from Zomato & Swiggy?

The frenzy of Buy Now – Pay Later Surges
1 week ago